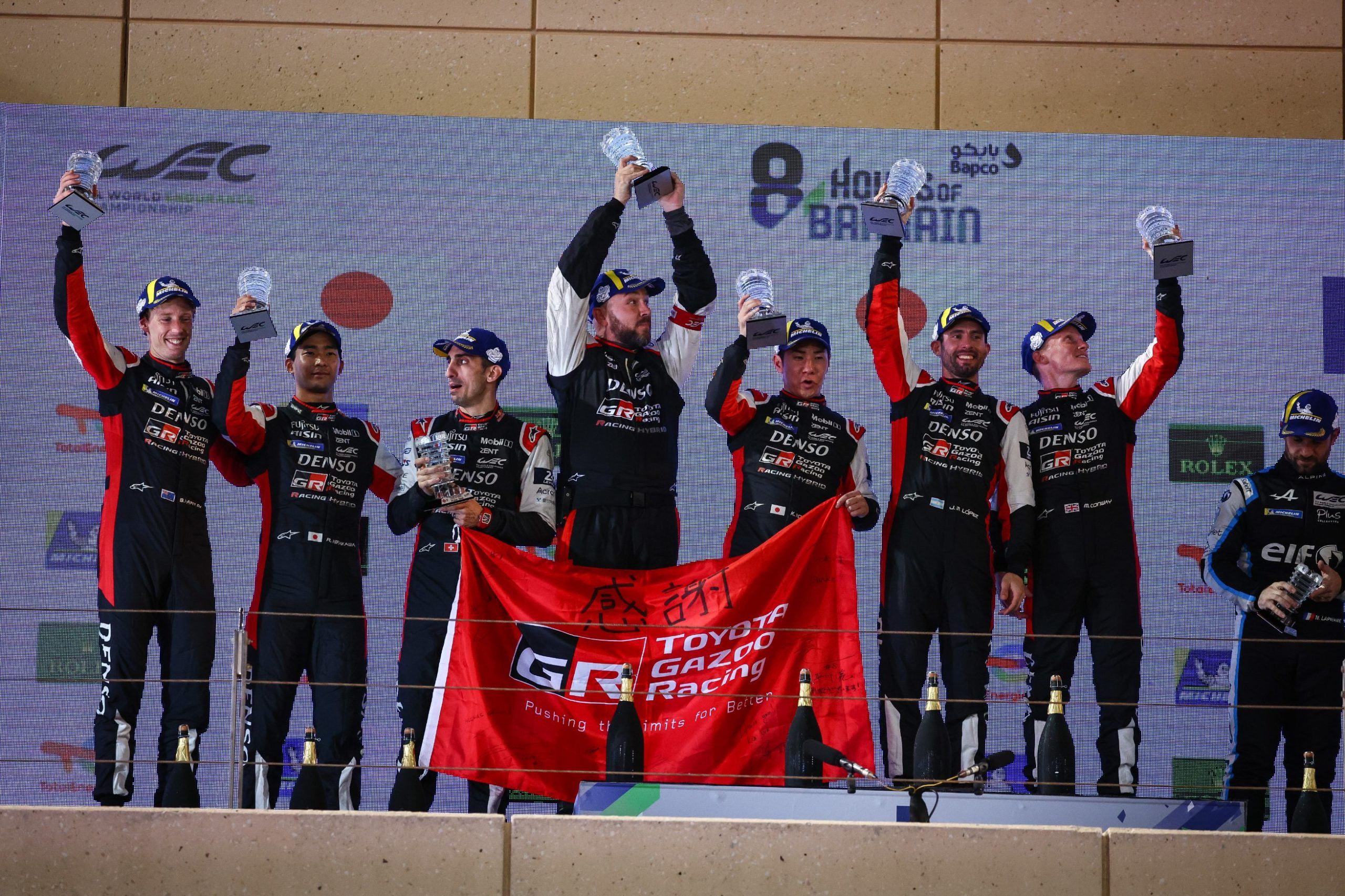 The #7 Toyota leads a one-two finish at the WEC 8 Hours of Bahrain in the Hypercar class, with the #8 winning the drivers’ title in a two-way battle.

Toyota Gazoo Racing secured a decisive one-two finish at the BAPCO 8 Hours of Bahrain, with the #7 Toyota GR010 Hybrid of Mike Conway, Kamui Kobayashi and Jose Maria Lopez winning the race with the #8 car. But it was Sebastien Buemi, Brendon Hartley and Ryo Hirakawa who clinched the FIA ​​World Endurance Championship drivers’ title by finishing second and making four consecutive titles for the Japanese manufacturer in the WEC.

While Hartley and Buemi won their 3rd titles, the Kiwi becoming the first driver to win championships with two brands after his successes with Porsche, Hirakawa won the title in his first WEC season. The #8 crew started the race from pole position one point clear in the standings ahead of the #36 Alpine A480 Gibson of André Negrao, Nico Lapierre and Matthieu Vaxiviere.

Toyota changed the position of its cars as the #7 Toyota GR010 Hybrid then driven by Mike Conway seemed to have a faster overall pace. Kamui Kobayashi widened the gap with the n°8 car during his passages at the wheel and it was Jose Maria Lopez who crossed the checkered flag 45 seconds ahead of his teammates.

The Alpine ELF team entered the race just one point behind the crew of the #8 Toyota, but despite finishing third they didn’t have the pace to worry the Toyotas on the track and finished the race. two laps behind in third position. The French manufacturer was undertaking its last race in the Hypercar category until the 2024 season.

The two Peugeot TotalEnergies Peugeot 9X8 drivers showed good pace throughout the weekend in Bahrain but were ultimately unable to sustain a challenge up front. The n°94 car of Loic Duval, Gustavo Menezes and Nico Mueller took fourth place, while the sister car of Jean-Eric Vergne, Mikkel Jensen and Paul di Resta was forced to retire after several track stops in due to a suspected electronic problem in the gearbox.

Sean Gelael, Robin Frijns and Rene Rast secured the WRT team’s second consecutive victory in the WEC, while the No.38 JOTA trio of Antonio Felix da Costa, Roberto Gonzalez and Will Stevens claimed a memorable LMP2 title. The No. 31 Gibson Oreca 07 took the lead midway through the third hour when Rast bumped into the then-leading No. 22 United Autosports Oreca, driven by Phil Hanson.

Hanson’s teammate Filipe Albuquerque had dominated the race from the start, overtaking the Realteam on pole position by Ferdinand Habsburg’s WRT car on the opening lap. But it came at a slight cost as the Portuguese driver was judged for taking the lead by abusing the track limits. WRT cemented their lead when Rast and then Frijns extended it to control the ultra-competitive class.

As the #22 United Autosports USA car fades, the #23 sister car of Alex Lynn, Oliver Jarvis and Josh Pierson takes second place after a great race. Da Costa, Gonzalez and Stevens completed the podium in the No.38 JOTA Oreca, enough for the trio to rack up the points needed to clinch the LMP2 title. This means they added the crown to their victory at the 24 Hours of Le Mans which they won in June.

LMP2 Pro/Am winners and 2022 champions have been confirmed as Francois Perrodo, Nicklas Nielsen and Alessio Rovera in the #83 AF Corse Ferrari. They had a late-race scare with a splash fuel stop, but that wasn’t enough to derail their success.

Alessandro Pier Guidi, James Calado and Ferrari won the GT FIA World Endurance Drivers’ and Manufacturers’ titles in hard-fought fashion at the Bahrain International Circuit today. The pair were forced to nurse their Ferrari 488 GTE Evo car to the checkered flag after developing a gearbox problem in the seventh hour of the eight-hour race.

As they celebrated the championship, Antonio Fuoco and Miguel Molina won the latest GTE-Pro race, their first in 2022. Molina and Fuoco’s #52 Ferrari 488 GTE Evo finished ahead of the #52 Chevrolet Corvette C8.R. 64 driven by Nick Tandy and Tommy Milner, while Kevin Estre and Michael Christensen completed the podium in the #92 Porsche Team GT Porsche 911 RSR-19.

Estre first took the #92 Porsche to the lead in the LMGTE Pro class by overtaking its direct rivals at the start, before engaging in a fierce battle with the #52 Ferrari driven by Fuoco. The first of three Full Course Yellows upset the order in the second hour as Fuoco, Estre and the #91 Porsche of Gianmaria Bruni pulled up in front of the FCY.

It was the opposite of Calado’s No. 51 Ferrari and Corvette’s Nick Tandy who objected to the period of caution itself. This allowed Calado and Tandy to win and the pair ran first and second. Halfway through the race, Ferrari took a 1-2 formation with Molina cleared to pass Calado via a team order.

The title race then seemed turned upside down in the seventh hour when the gearbox problem hit Calado. But he and Pier Guidi adapted to the problem and reached the checkered flag to savor their title success. Corvette Racing was delighted with second place with Tommy Milner and Nick Tandy completing a strong first season in the WEC for the American team entered.

To complete the podium, the #92 Porsche GT Team entered the Porsche 911 RSR-19 driven by Kevin Estre and Michael Christensen. They took advantage of a late pitstop by Gimmi Bruni to skip their stable mates and finish third, which was enough for second place in the standings.

Ben Keating and Marco Sorensen had a great season winning the LMGTE Am Championship by finishing in fourth place alongside teammate Henrique Chaves. The Aston Martin trio finished fourth in the LMGTE Am class today, which was enough for the silverware, as their closest rivals Paul Dalla Lana, David Pittard and Nicki Thiim in the NorthWest Aston Martin finished just behind them in fifth position.

Frey, along with her Iron Dames teammates Michelle Gatting and Sarah Bovy, led for most of the race from her second pole position of the season. But their chances of equaling their second places at Monza and Fuji were lost when Ben Barnicoat in the no56 Porsche 911 RSR-19 Project 1 passed Michelle Gatting for second in the dying minutes of the race.

The move allowed Barnicoat’s new teammates for the weekend, PJ Hyett and Gunnar Jeanette, to help complete a well-deserved double for the German side.

Here are the complete results of the 8 Hours of Bahrain WEC: http://fiawec.alkamelsystems.com/

[Note: The story is as per press release]