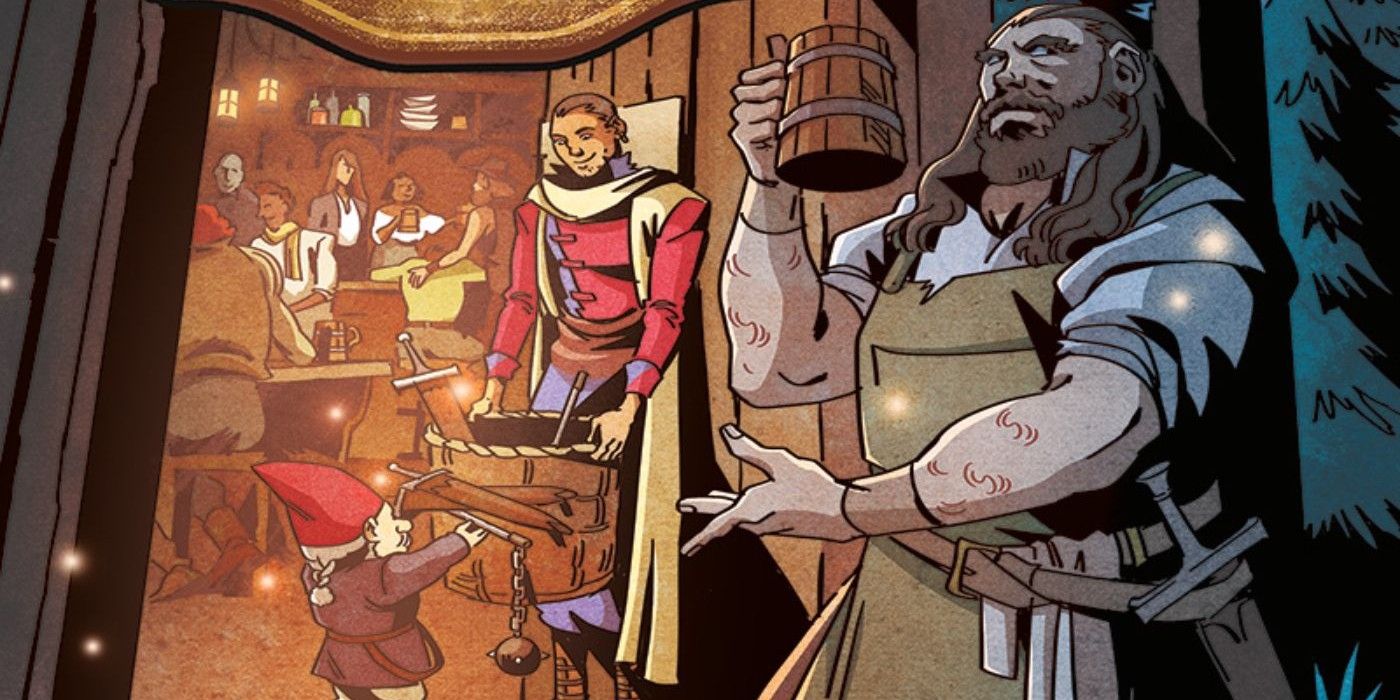 The ever-increasing popularity of Dungeons & Dragons means the medieval fantasy genre, once beloved by fans, now has mainstream appeal. Tropes and clichés have become so common that their use is now almost subversive. Side quests builds on that idea, telling a working fantasy/adventure comedy based on beloved genre standards like starting quests in a tavern and miscasting spells. Written by Brian Schirmer with art by Elena Gogou, coloring by Rebecca Nalty, and lettering by AndWorld Design, Side quests #1 brings readers into a comic-fantasy setting to tell a very character-driven story.

Side quests #1 tells the story of a local tavern owner, Barrow, and the eclectic group he has hired to help cook and run the bar. The cast of protagonists face classic problems: local gangs raise taxes for Barrow, while its staff deals with unrequited love, personal quests for revenge, and making sure their work is appreciated. While daily life in a fantasy town, complete with walking skeletons and real magic, is enough to add drama for most, the king has just announced that he’s considering closing the tavern and turning it into a barracks. Faced with the loss of their breadwinner and their newfound family, Barrow and its employees must find a new way to stay open.

Starting a fantasy adventure in a tavern and taking on quests has become so cliché that Side quests #1 can play to this trope. The start of the issue sees the workers toying with groups of beggars, sending them on ridiculous missions (which accidentally lead to their immediate death). Occasionally a bard will provide exposition, previewing events to a song in a classic Dungeons & Dragons-style. With several bards in the Side quests world, however, there is an apparent competitive nature and an almost battle of the bards. This self-awareness of his own fantasy style adds to the appeal of Side quests but mostly takes place against the backdrop of a more traditional, high-stakes save our store storyline.

The general story of Side quests does the job. The introductions are always tough, but Schirmer threads the backstory needle while setting the story’s tongue-in-cheek tone. The characters are interesting – from the skeletal leader to the hidden royal – but they demand more story than can fit in one issue. Schirmer established their motivations but also individual personalities (and neuroses) that add to their uniqueness. While issue #1 isn’t long enough to give them each their own arc, it sets them up nicely for some interesting storylines in the future.

Gogou’s art does a lot of the heavy lifting in establishing the world and these unique characters. From Vail’s haughty, bored expressions to Barrow’s past strength in making a reanimated skull emotional, she elevates the script and lets the comedy really land. Some moments are missing, and magic as an omnidimensional reserve seems mundane, but ultimately Gogou’s work in Side quests #1 is a triumph. Nalty adds the standard fantasy earth tones throughout the number, erasing some of the character vibrancy but certainly setting the stage.

Side quests #1 provides a great start to a series that’s sure to be a delight. All the components of tavern workplace comedy are there, and the unique and compelling characters are interesting enough to carry the premise. While the first issue suffers a bit from having to set up so many premises, the idea is strong enough and the remaining mysteries compelling enough that readers will surely come back to see what happens next.

EL is a writer who believes without irony that most things are games. She is currently a graduate student in the history of the exact sciences in antiquity, and *has thoughts* on ancient mathematics and modern astrology, as well as good tutoring and immersion. She shared these thoughts (and her writings) with digital sites like Eidolon, Lady Science and Scholar in the first person. In his spare time, EL enjoys puzzle games, ARGs, lyrical TTRPGs, handstands, and trapeze. You can follow her (and recommend GM-free storytelling games) on Twitter.