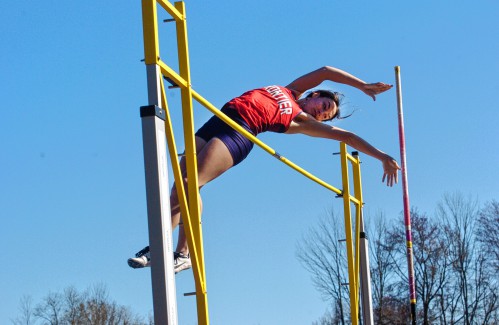 Alena Maes-Polan herself had a day for the Frontier women’s track and field team on Friday in a meet against Athol.

Maes-Polan set a personal best in the pole vault with a jump of nine feet and nine inches. The senior also took first place in the 400 hurdles with a time of 77.4 seconds, helping the Redhawks to a 143-2 win over a shorthanded Bear team in South Deerfield.

Border 118, Athol 19 — Jack Vecellio broke another mark of his own on Friday afternoon, again breaking his school’s record in the pole vault. Vecellio cleared 16 feet, bettering the previous record of 15-6 he set on April 1 this year.

“It’s nice to know that I kind of have a little higher grades every time, but yeah, there are different grades that I’m aiming for, like state records and local (records),” said Vecellio.

Ideally, the senior wants to clear 17-6 by the end of the outdoor season. That would break the state record, currently 17-1 held by Erick Duffey and set back in the summer of 2017.

“It was the nicer first day, so we’re working on the track starting from different (and) further down the track,” Vecellio said on Friday. “So once I can go back, I think that will be the most important thing to help me improve.”

Joe Grant took the only victory of the day for Athol, winning the shot put with a 33-11 draw.

Turner 5, Athol 4 — Levin Prondecki broke a pair of singles and brought home a pair of RBIs while Jackson Cogswell had a trio of hits as the Thunder earned an independent win at Athol on Friday.

Alex Quezada and Lincoln Coleman each had a pair of hits while Derek Wissmann had it safe for Turners (5-2). Quezada went the distance on the mound, striking out five.

Dilan Fountain had a double and a single, Caleb Cox smashed a double and Connor Mahony hit it safe for Athol (0-7). Quentin Polana had six strikeouts in the loss.

Franklin Tech 5, Frontier 3 — Lilly Ross hit an RBI double while Kylee Gamache had a hit and two RBIs as the Eagles came away with a 5-3 independent win over the Redhawks at Turners on Friday.

Hannah Gilbert and Keira Stevens each had an RBI single for Franklin Tech (6-1). Lauren Ross took the win in the circle, striking out six.

Delaney Fifield had a single and a double for Frontier (2-7). Ashley Taylor had a triple RBI, Gabrielle Adams had an RBI single, and Makayla Santos hit it safe. Chloe Cutting struck out three in the loss.

Mount Greylock 7, Turners 6 — The Thunder rallied in seventh scoring four runs but were unable to get the tying run on the plate as they fell to Mounted Police in Franklin County League action West in Williamstown on Friday.

Madi Liimatainen hit a home run and added a single for Turners (4-3, 1-2) while striking out 16 in the circle. Emily Young scored a brace while Paige Sulda and Jenna Petrowicz struck safely in the loss.

Border 4, Springfield International 1 — The Redhawks won two singles matches and both doubles matches to earn a victory over the Bulldogs at South Deerfield on Friday.

The best match of the day came in singles No. 1, with Emma Clancy falling to Springfield International’s Ryayanna Shobrick 6-2, 7-6(2) in a back-and-forth affair.

Turners 4, Hampden Charter 1 — The Thunder came away with a trio of wins and a forfeit to earn a 4-1 win over Wolves at Turners on Friday.

Springfield International 4, Turners 1 — Mike Boyle picked up the lone win of the day for the Thunder in singles No. 1, earning a 6-2, 6-0 victory.

Alex Sabin dropped to No. 2 singles while Jake Reich and John Carmichael lost to No. 1 doubles for Turners. The Thunder lost the No. 3 singles and the No. 2 doubles.