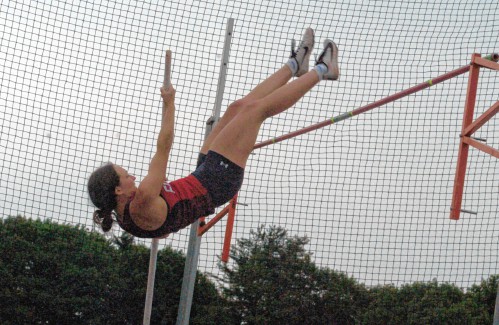 The Frontier Regional School senior came out with a bang on Thursday. Maes-Polan broke a personal best 10 feet even in the women’s pole vault, taking eighth place on day one of the MIAA Outdoor Track and Field Championships at Westfield State University.

“I’m thrilled,” said Maes-Polan, whose previous PR was 9-foot-9. “At the start of the season, I wanted to break 10 feet. The fact that it all came together today was fabulous.

Maes-Polan was joined in the 10ft club by Mahar senior Sienna Moore, who also cleared 10-0 and finished 10th overall. Junior frontier Ayla Starr tied for 16th with a 9-0 superior clearance.

The fact that Maes-Polan even had a crack at 10 feet was not taken for granted about an hour earlier on Thursday. The outfielders get three attempts to clear a pitch before the bar is raised six inches, and she misses her first two attempts at 9-0.

“I was giving myself heart palpitations,” Maes-Polan said with a smile.

Once she cleared 9-0 on her third and final attempt, she was able to relax a bit and continue in the competition. She actually cleared 10-0 on her very first attempt but couldn’t jump 10-6, ending her afternoon.

“That third attempt is so stressful, but once you get it, it’s such an amazing feeling,” she explained.

Frontier girls’ track and field coach Bob Smith said Maes-Polan, who started jumping in seventh grade, was a dedicated athlete during her tenure with the Redhawks.

“I think it was a real accomplishment for her and a great way for her to cap off an outstanding career,” Smith said. “Both (Maes-Polan and Starr) are incredibly dedicated. I have to get them to stop jumping at the end of practice every day. Most of the time they’ll just look at you and say, ‘just a more? “It was that attitude that brought them (to the All-State meet).”

Maes-Polan will attend Hampshire College next year and she said she hopes to continue her aerobatic career there.

While the Franklin County contingent largely hung around the pole vault area Thursday, Greenfield senior Theo Popusoi was competing on the track in the All-State meet. Popusoi, who will be back on Saturday when the boys take their turn in the pole vault on day two of the competition, improved his start time in the 400m hurdles by 0.16 seconds. He took 16th place in the event, crossing the line with a time of 59.49 seconds.

Acton-Boxborough’s Noah Stegmeier won the 400 hurdles with a blistering time of 55.82 seconds.

Several Franklin County athletes will be competing Saturday at Westfield State, including Frontier star Jack Vecellio, who will attempt to break the state’s pole vault record as the No. event.