Approved as the first all-Chetak unit on 18 December 1962, with eight helicopters, 114 Helicopter Unit was raised on 1 April 1964, with two aircraft and was based in Leh — replacing the Mi-4 detachment of 107 Helicopter Unit stationed since the 1962 war. The 114 was the IAF’s first permanent unit in Leh, where it continues to this day.

Also Read: From the IAF Vault: How the C-87 Liberator Took India Over Everest and Beyond

Squadron Leader Arvind Dalaya moved to take command. In addition to pilots converted from Mi-4s, the unit also had five pilots from 83 PC who had been directly commissioned on helicopters after training in France. The unit made Leh-Srinagar-Jammu its permanent home for the next two decades.

Its initial steed, the French Alouette III, was chosen because it was nimble, lighter, reliable and had more power reserve, although its load capacity was lower. It is a tribute to the design that the aircraft continues to serve across the world in its upgraded avatars.

Ironically, its service ceiling of 10,500 feet almost matches Leh’s elevation. It should therefore never even have taken off from Leh, but that is the story of the 114 — courage, bravery and gallantry on a daily basis! The journey however was not easy and the fees had to be paid.

From the start, the unit got a taste of the hardships and courage the region demanded. One plane crashed while crossing Khardungla following engine failure, while another had to land by force at Murgo (16,000ft). Engine changes in remote locations were common.

During the 1965 war, the 114 engaged in casualty evacuation and mercy missions, flying Chetaks in Red Cross colors. VIP outings and intelligence gathering missions were also carried out. An aircraft was also damaged by shrapnel during a raid.

Between the 1965 and 1971 wars, the unit’s strength grew to 10 helicopters, including a detachment at Baramulla which provided air access to the Haji Pir area. Ladakh, however, remained the 114’s main area of ​​operation. In August 1968, a helicopter from 114 cleared the Chandigarh-Kulu-Keylong-Leh route – a first for the IAF!

The 1971 war saw the unit again carry out casualty evacuation and mercy missions amidst enemy fire, mainly in the Kargil and Uri sectors. On December 5, a helicopter piloted by Flight Lieutenant BS Chandel and Flying Officer SS Ramarao was shot down by an F-86 near Srinagar airfield. Both miraculously survived. 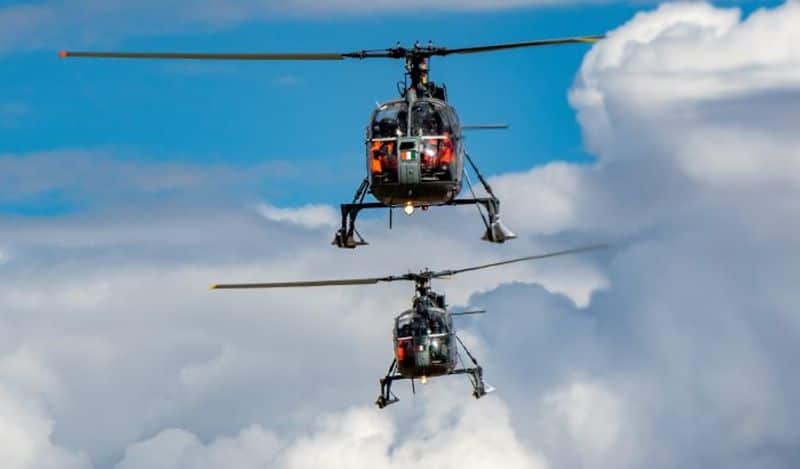 After the war, the unit received an additional role and fitted with the AS-11B anti-tank guided missile on some of its Chetaks. This role continued until around 1987, by which time the 114th Helicopter Unit had already made its date with fate. This involved a certain area called “the place of wild roses”.

Prior to his epic expedition to Siachen, Colonel “Bull” Kumar conducted an aerial reconnaissance over the region on August 3, 1978, with Second Lieutenant Sambyal and Flight Lieutenant AS Mann pioneering the forays of the IAF above the “3rd pole” of the world. The “Glacier Pioneers” had “boldly gone where no pilot had gone before”.

In 1985, the 114 Helicopter Unit was called the “Glacier Pioneers”. Around 1990, this name was changed to “Siachen Pioneers”, which remains to this day, as they remain at the forefront of helicopter flight. But first, let’s go back to the days of the pioneers

The first resupply mission to Siachen followed in September 1978. Second Lieutenant Monga and Flight Lieutenant Manmohan Bahadur then landed on the glacier on October 6, 1978, in Z-1410. This landing at 15,500 feet was an achievement that was not recognized as it should have been. Siachen had been saved; six years before the announcement of Operation Meghdoot.

In the meantime, the unit, continuing its ‘civil aid’ role, had won unprecedented laurels, including a record five Shaurya Chakras for daring rescue missions – including four for mountain rescues.

The government-authorized Operation Meghdoot to secure Siachen was officially announced on March 31, 1984. However, April 13 is often seen as the start – being the date when Indian Army troops reached Bilafond La, which is at the foot of Amar and Sonam – the highest helipads in the region. 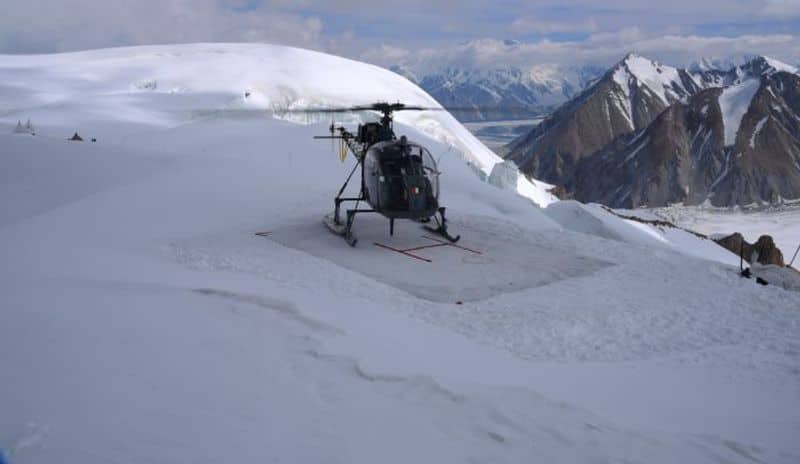 The 114 began reconnaissance of Siachen in late March 1984, inducting troops into the 5-6 camps established by the Indian Army. Drops were executed before Sia La/Bilafond La and casualty evacuation was undertaken over packed snow. On April 13, Indian Army troops were dropped at Bila, where much blood from both sides was to be spilled.

Siachen is 70 km long and has subsidiary glaciers to the west, which terminate in passes (La) which overlook the lower positions of the Pakistani army – Sia La and Bilafond La being the second main ones. Although he may be able to observe certain areas, it is a duck that the Pakistani army has ever been in Siachen.

In 1981, Chief of Air Staff Idris Hasan Latif noticed the air officer staff in charge at the controls of the Cheetah lighter in Darbuk. He also ordered an immediate type change for the 114, resulting in the unit getting its first two Cheetahs. For the next six years they flew both types – becoming a Cheetah-only unit in 1987, thus also losing their ATGM role.

This was a welcome change as Siachen poses unique challenges. The rugged terrain offers few landing spots. Wind speed, turbulence, temperatures and cloudiness can be extreme. But of all the natural elements, altitude and lack of oxygen affect men and machines the most. At Siachen, it is the density altitude, and not the pressure altitude, which dictates the behavior of the aircraft. In simple terms, it is “the altitude at which, in terms of performance, the aircraft thinks it is”. The generally higher density altitude is debilitating to aircraft performance.

Flying at the limits of the aircraft’s performance requires careful calculation of the “total mass” of the aircraft. For a cheetah to fly here with a few extra kilograms of ration can have deadly effects. A “jugaad” calculator was therefore created by the Pioneers and stuck on the dashboard.

Siachen had Camps I, II, III (later named Kumar), IV and V. Bilafond La, Bhim, SiaLa, G3, Zulu and Hoshiar were on “branches”. Soman, Amar, Khanda and Ravi helipads started in 1985 and were all at an altitude of 15,000 to 19,500 feet! These were and still prohibit heights in all respects.

Matchbox-sized helipads that appear to be on pillars add to the pilots’ enigma. Certain weather conditions create a “White Out” similar to being inside a ping pong ball, where all depth perception is lost. When there are no clouds, the sheen of snow hurts the eyes.

Coveted qualification (patch introduced in the 2000s), it takes work to be Captain on the Glacier (Champ of champions). A 7-8 month effort, flight hours as co-pilot to the highest helipads, conversion and clearance by a qualified flight instructor, followed by flight as captain.

If the terrain, weather, and altitude weren’t enough challenges, this was an active war zone where enemy fire was common. Between 1985 and 2000, 114 HU staff members earned two vir chakras and five Yudh Seva medals, in addition to dozens of Vayu Sena medals and commendations.

Flying at the edge of the envelope was risky. Several aircraft were lost, some taking their pilots. Some were hit by enemy fire, sometimes causing injury, but the 114 continued. The citations for their awards are mind-blowing and everyone participated – from corporal to commander!

Spirit 114 is best understood following engine malfunction after landing at Amar (19,500ft) on July 3, 1990. The 182kg engine was to be changed at the helipad manned by the Sikh Light Infantry, who physically moved the plane to make room for the recovery helicopter.

A technical team led by Flight Lieutenant Sreepal of 114 was chosen for the job, while the commander, Wing Commander Goli himself, got the engine up in a stripped-down aircraft with no battery! The Pakistani army welcomed his landing. Sreepal and Sikh troops changed the engine, with regular music coming from the Pakistan Army.

On July 13, Second Lieutenant Sinha and Flying Officer Malhi landed at Amar to collect the aircraft. Luck smiles on the daring and the engine starts suddenly. The landing at the base camp was followed by celebrations. The unit had pulled off an impossibility, which sent morale skyrocketing!

They say you have to be crazy or assigned to the 114 Helicopter Unit to fly single-engine helicopters over Siachen. The spirit of the Unit is best embodied in its motto: “We do the difficult as a routine; the impossible may take a little longer.

In 1996, the 114th Helicopter Unit received President’s Standards, under the command of Wing Commander Manmohan Bahadur, who had previously been on the first aircraft to land on Siachen and later served as SO of the Chief of State -Air Major AY Tipnis during the Kargil War. and Commodore Commanding Officer of Helicopter Unit 114.

The 114 troopers at his Karmbhoomi, now piloting an upgraded motor Cheetal. The plane and the crew have changed, but the spirit remains the same.