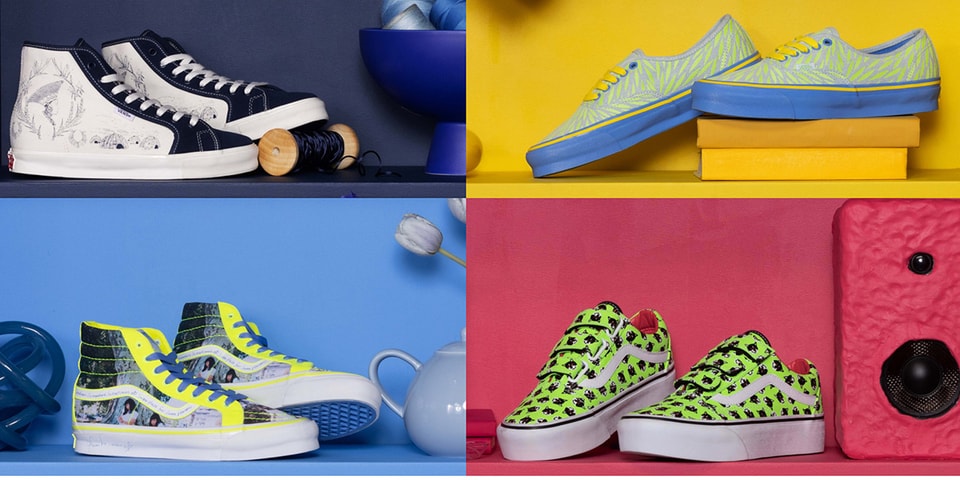 Sarah Andelman – former creative director of colette streetwear – is teaming up with Vault by Vans for an exclusive capsule that commemorates International Women’s Day. For this initiative, she selected four inspiring artists from around the world, including Julia Chang, Fumiko Imano, Sindiso Khumalo and Soko. to put their creative spin on various garments and shoe silhouettes.

“I’ve always been a Vans lover,” says Sarah Andelman. “For this Vault by Vans collection, I immediately thought of these four creative women that I met in different cities, different years, all in different contexts but they all share a passion for what they do, and they are all amazing at managing their work and personal lives.I hope their collections reflect their philosophies and will be enjoyed by women of all ages.

Julia Chang – an artist based in Brooklyn, NY – often creates with paint and ceramics, and much of her art is made to celebrate imperfection. For this collection, she designed with the intention of imagining how her shoes and clothes would live in the real world. She’s worked her magic on an adult Authentic LX and a kids’ Authentic, both of which feature one of her paint jobs on a faded denim base coat along with jazz yellow stripes and laces. Alongside the kicks is a bucket and a watercolor-inspired graphic tee.

Fumiko Imano is widely known for her self-portraits and photomontages which are shot with a 35mm camera and then cut and pasted to create a twin aesthetic. She turned to her solo exhibition titled “Somehow Somewhere Sometimes at Some Place for Some Reason” which was shown at Kosaku Kanechika Gallery in 2020 as a muse of her assemblage which involves the OG Sk8-Hi LX and the corresponding Sk8-Hi reissue for the little ones. A print from Imano’s exhibit is glued to the upper halves of the yellow canvas, and the spellings “Somehow Somewhere Sometimes at Some Place for Some Reason” sit on the side stripes and signature laces.

Based in Cape Town, South Africa, Sindiso Kkumalo launched her eponymous brand in 2015 which focuses on making clothing that is sustainable, uplifting women of color and showcasing her African heritage. Her mother – who was an activist – is the main inspiration behind her OG Style 24 NTC LX makeup for adults and Classic Slip-On for kids. An image of her mother on her Kkumalo’s wedding day dressed in Zulu attire is engraved on the side panels of the former and on the toes of the latter while traditional Zulu trusses are adjacent. Alongside the kicks, an oversized t-shirt features water-based ink to feature the same artwork.

The French singer-songwriter, musician and actress Soko completes this assortment. She draws from her bank of childhood memories for this collaboration, calling on vivid imagery of her cat Felix. She plates it integrally on the Old Skool V platform for adults and Old Skool V for children. Plus, it includes a long-sleeved t-shirt and bucket hat with sporty graphics.

Take a closer look at the capsule above and note that it’s releasing March 4 at select Vault by Vans retailers.

In other news, NEIGHBORHOOD and Vans have teamed up to make a ceramic Sk8-Hi Incense Chamber.