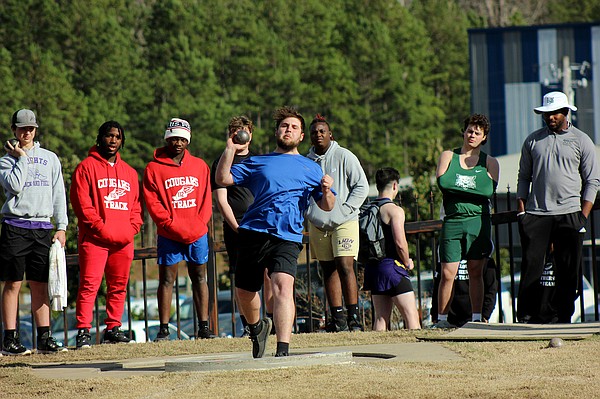 JESSIEVILLE – Annabel Robertson may have only competed in the pole vault for just over a month, but the Jessieville senior cleared 7-foot-6 to win the senior Lion relay event on Thursday after- noon at Don Phillips Field.

Robertson’s clearance may not have been enough to qualify her to compete in next month’s Class 3A State Championship in Lincoln, but with wind speeds over 10 mph and gusts over 25 mph, she was thrilled to have equaled her personal best.

“We got to about eight feet, which makes my PR 7-6, and I had to climb a pole, which was really exciting because I was waiting to get through that 100,” said she declared. “So I got up to 120, and we just got over it, started to wobble and he fell off, but I feel like I did pretty well. I got my PR. I I still have the same PR, but I feel like the next race we’ll be on my feet, especially with this new pole.”

Robertson said she didn’t feel like the wind was too much of a problem for her except on her approach.

“I don’t feel like it gave me too much trouble. … They let us wait a bit, but it was a bit difficult to carry the post. Like I felt like it force it to crash but it wasn’t horrible,” she said.

Although she just entered the event this spring, Robertson was a little bummed that she hadn’t tried it before.

“I wish I had a few years on it, but I never even tried it until this year,” she said.

Classmate Dillen Morgan cleared the bar at 10ft 6in to give his best and win the pole vault. Fellow senior Lion Dalton Gamerdinger, who was seeded 12-1 high, held his initial jump to 10-6, but he couldn’t erase any of his three attempts.

“I was hoping to go 11 feet…that track meet because the next track meet is going to be at Lake Hamilton, and it’s not going to be fun there,” Morgan said during a break while continuing to practice and to aim for the 11 foot mark. “I don’t like the other tracks usually.”

Morgan ended up dragging the pole for his winning jump as he struggled against the wind on his approach.

“I was going to take pole today, but… I wasn’t doing so well when I was training,” he said. “So I changed to sliding again, and the wind doesn’t hurt me, but when I’m going up in the air, it takes a lot.”

Jessieville senior Ty Lafoon and schoolmate Lincoln Crawford finished first and second in the shot put, but Lafoon said he was disappointed with his shot.

“During the warm-ups, I threw about three feet further than me,” he said of his 42-foot, 11-inch throw. “I don’t know what happened, but that wasn’t my further.”

Currently ranked No. 2 in the state in the event, Lafoon said he is still trying to earn a qualifying grade for the Class 3A competition.

Lafoon said he was extremely happy to see his teammate finish second in the event with a 42-8 shot.

“I’m really proud of him because he made a two-foot communication today,” he said. “We really tried to bring him in and qualify.”

Jessieville ended up winning the competition boys and girls. The girls finished with 132 points for the win with Bigelow (101), Episcopal Collegiate (74), Centerpoint (59) and Bismarck (47) rounding out the top five. Mount Ida finished ninth with 20 points.

The Lions collected 178 points to win the competition by 99 with Helena/West Helena finishing second with 79. Episcopal Collegiate (56), Mayflower (47) and Dover (37) rounded out the top five with Fountain Lake in sixth with 23, Centerpoint (21) eighth and Bismarck (19) 10th.