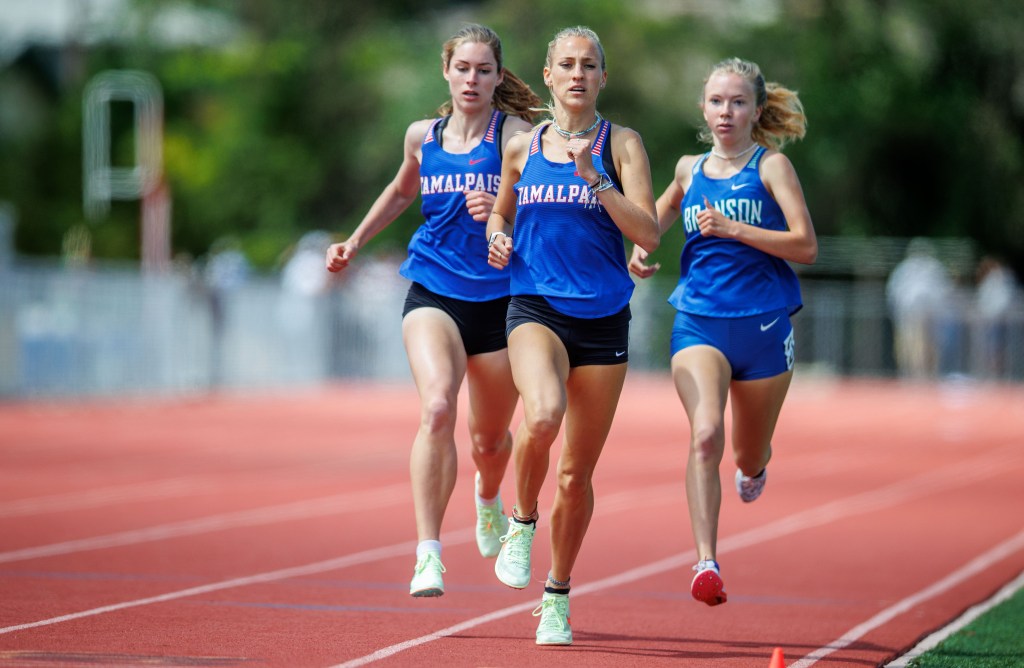 Tam High senior Jamie Nel blasts from the pages of a comic book, playing the role of a superhero with exceptional speed and strength.

In fact, “All thanks to the Spiderman glasses. They give me the edge,” said Nel, multiple winner of the MCAL track and field championships, which ended on a windy Saturday at Novato High.

The Tam boys and girls both won MCAL pennants, ahead of rivals from Redwood and Archie Williams. The Redwood boys suffered from illness and injury, but even with some of their best runners sidelined, the Giants’ roster was deep enough to keep them in contention for the title.

The North Coast Section Redwood Empire Meet is scheduled for May 14 at Petaluma High. Branson qualifiers will compete in the NCS Class A Meet at Montgomery High School.

Nel had two individual wins and a relay win in Saturday’s finals. Chased by teammate Hector Lyko, Nel won the 110 hurdles with a personal best 15.05 seconds, less than three-quarters of a second faster than Lyko.

“Nel is a real contender,” said Lyko, who committed to UC Santa Barbara. “I try to push him to run faster. It is difficult to catch. I’m so proud of him.”

Lyko, Emmet Kneafsey, Nel and presenter Hunter Vandien won the 4×400 relay in 3:33.82, less than a second ahead of the Archie Williams quartet of Luke Calegari, Toby Laporte, Nate Wolford and Eric Overaa.

Nel moved into third place in the triple jump with a mark of 40ft 6in, more than 2’3″ better than his previous personal best set two weeks ago at the Viking Track Classic.

Caden Carney of Tam won a close race to the finish line in the 1600m, setting the mark at 4:19.31, just over two seconds ahead of Nate Wolford of Peregrine Falcons and Ziggy Nacco of Marin Catholic. Carney won another close race in the 3200m (9:28.38) as the day drew to a close. He picked up the pace on the final lap to put some distance between himself and Redwood’s Daegan Cutter (9:31.09) and Evan Lee (9:34.03) after being in a tight field for the opening runs.

Archie Williams’ Max Henzl was chasing not only his own personal best, but also a piece of school history. He won the 100 meters with his best time of 10.78, just 0.02 seconds off the school record set in 1966.

“I’m not satisfied,” said Henzl, who had qualified to compete in six events but rules limited him to only four events. “I want to do better, faster. I’m focused on sprints. There is good competition in the MCAL and NCS. I’m excited to race against these guys.

Henzl also won the 200m with a personal best 22.39 seconds and Thursday had easily passed the field in the two-foot long jump with a winning mark of 22-2, ahead of Tam’s Ezra Levy and Branson’s William Bollini.

Records were supposed to be broken as Dominic Tagliaferri of Marin Catholic won the men’s 400m in 51.29 seconds, and Calegari of Archie Williams won the 800m in 2:02.41, two new personal bests.

In the field events, Redwood’s YurMajesty Starbird won the shot put (41’2.75″) and San Marino senior Nick Goodin tossed the discus in 131’11.5″ for a new personal best of over 11 feet better than his previous record, and more than 26 feet better than the mark of 105’0.5” set by second Zachary Wexler of Redwood.

“The competition was pushing me,” said Addae, whose time in the 100m is a new school record. “It’s going to be tough at the NCS, with more competition.”

Tam’s girls narrowly edged Redwood, 107-104, for the team pennant, although the title was only settled in the final races of the day. The Hawks knew they had clinched the pennant when Tam’s Brianna McInnis crossed the finish line to easily win the 3,200m, and teammate Emma Dunmire clinched second place.

McInnis, who also won the 1600 to start the day with Dunmire in second, led the entire 3200 distance, eventually passing the last runner to finish in 11.10.80, more than 25 seconds ahead of the next finisher. As the riders entered the final lap, Dunmire began to close the gap on Redwood’s Audrey MacLean, who was running far behind. Dunmire passed her with the finish line in sight to give the Hawks the points they needed.

“I feel bad racing against my friends,” Gardner said. “I know so many of these girls on all these teams. They are great athletes. NCS should be great fun with these girls and so many other competitions.

Adeline Johnson of Branson won the 800 (2:21.60), followed by Alexandra Greenwald of Archie Williams and Dunmire of Tam, McInnis, Gardner and Alana Concannon.

Marin Catholic’s Madeline Heathwood won the 100 hurdles (17.60) and 300 hurdles (48.58), with personal bests in both events. She also led the winning Wildcats 4×100 relay team with Alivia Etcher, Millie Weitz and Addae.

Jaliyah Wiggins of Branson edged out Sally Cesko of San Marin to win the high jump, while Kyra Allen of San Rafael set the bar in the pole vault (9’9″). Millie Weitz of Marin Catholic won the high jump in long (17’6″) and finished second to Terra Linda’s Marie Jones (36’1″) in the triple jump.