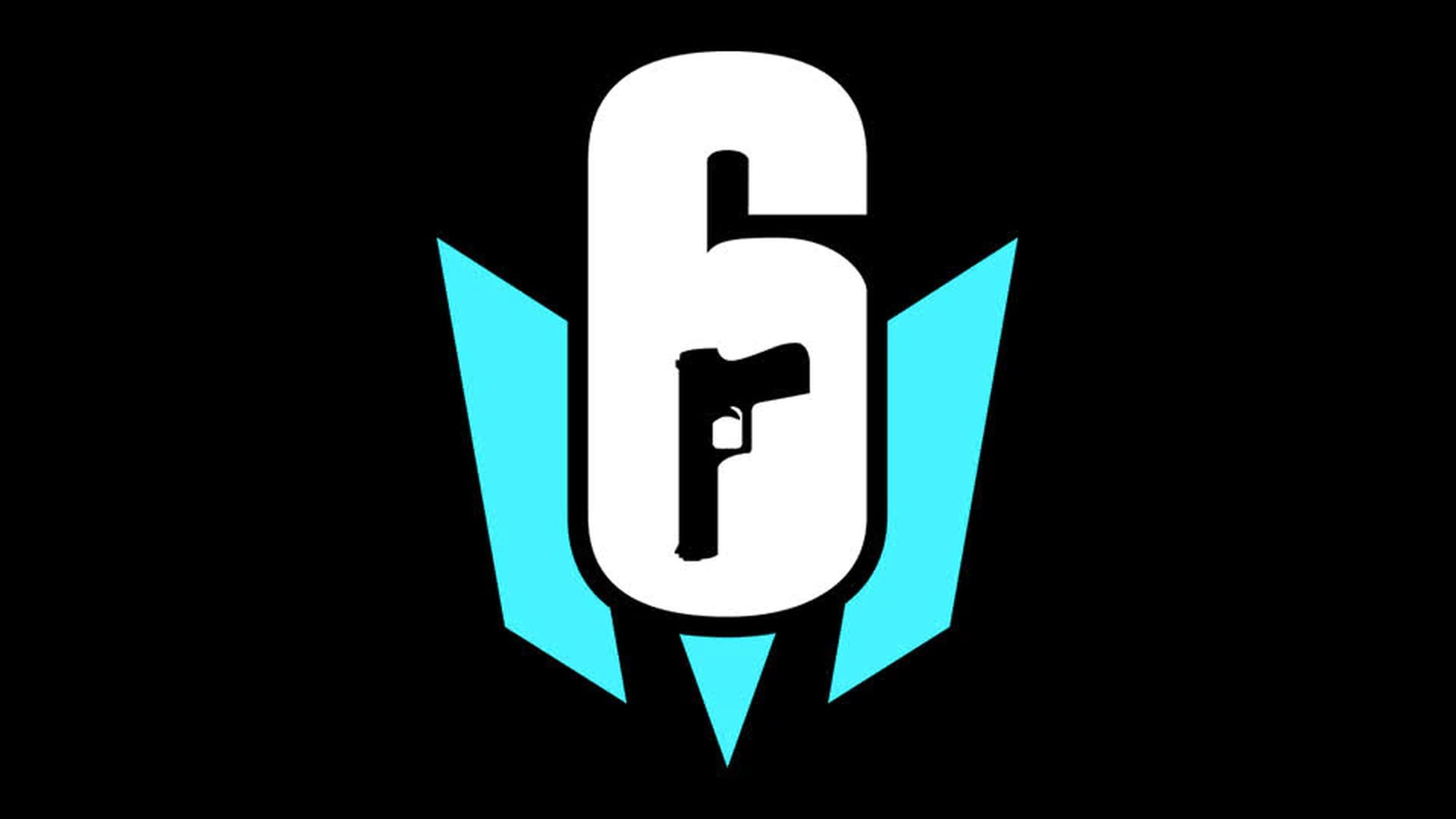 PMany major PC and console franchises have made successful leaps to mobile in recent years, and several more are looking to follow in their footsteps – and when it comes to shooters, there aren’t many games bigger than those of Ubisoft. Rainbow Six headquarters. In this sense, the next Mobile Rainbow Six has huge expectations to live up to, with the game promising a faithful translation of the tactical shooter to mobile devices, but its development team is confident that it will deliver on those lofty promises. To learn more about how Mobile Rainbow Six is going to do it and what players can expect from its controls, modes, monetization, etc., we recently reached out to its developers with several questions about the game. Below you can read our interview with lead game designer Oliver Albarracin and creative director Justin Swan.

rainbow six was hugely successful on PC and consoles, most notably with Rainbow Six Siege during the last years. Is it a daunting task trying to replicate something like this for mobile devices, or do you see it more as an interesting challenge? Or a little of both, perhaps?

It was certainly a challenging but rewarding experience to bring Headquarters on mobile. We’ve built an incredible team full of mobile experts who have worked very hard to make Headquarters from scratch on a new engine. We learned a lot from the Headquarters team and I worked closely with them. They gave us predictions and data to help us master many mechanisms. Yes, it can be daunting, but we’ve been very transparent from the start about our process and really want to bring Headquarters what the community wants. We made some changes after Alpha, we are now in beta and can expect more changes as we listen and adapt to feedback from our audience.

How convinced are you that the rainbow six can the experience be properly adapted as a mobile game without losing too much of what makes it work?

Mobile Rainbow Six reproduces the same experience you have while playing Headquarters on console or PC but optimized for the mobile experience. Our philosophy was to keep all the basic features – camera, control and character – that Headquarters a and makes them smoother and more natural to run for mobile controls. We focused on what matters most in Headquarters: the feeling of a tactical shooter, using your environment, your gadgets and working with your team to defeat the enemy in close combat. Our team of mobile experts and working closely with the Headquarters team also helps us stay true to the Headquarters live. 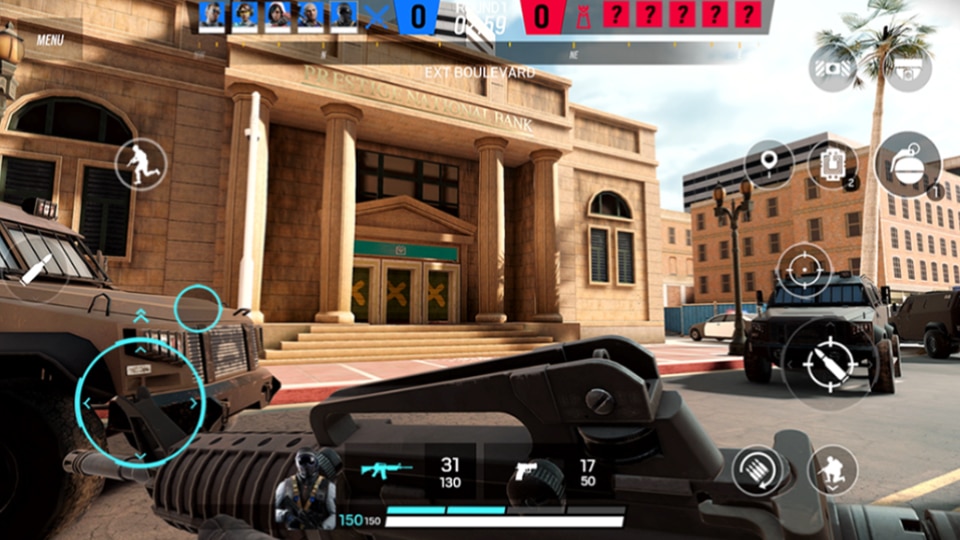 “The reality of mobile is the number of different device types, all with different aspect ratios, processing power and RAM. Having a smooth and intuitive experience has been the goal since the start of production. And the HUD, controls and input systems are things that we will continue to reiterate on.”

Specifically, when it comes to things like controls, UI, etc., how much tweaking did you have to do to ensure the game can be played comfortably on smaller touchscreen devices?

Yes, the reality of mobile is the number of different types of devices, all with different aspect ratios, processing power and RAM. Having a smooth and intuitive experience has been the goal since the start of production. And the HUD, controls, and input systems are things we’ll keep iterating on. What we have done though is try to make everyone feel like a pro, an example is to automate some systems and allow players to perform complex actions easily. An example would be motion transitions: you can walk then sprint then jump onto an object with just a thumbslide. Instead of multiple console or PC inputs. Of course, if players prefer to have a separate entry to do all of this, we have the option for players to do so in the settings. We’ve also added plenty of customization options to help players fine-tune their controls and HUD setup.

Does the hardware of mobile devices prevent Mobile Rainbow Six to do anything that players might consider essential to Rainbow Six Siege?

Many phones these days can outperform consoles and even PCs. You’d be surprised what’s under the hood of some of the newer phones and they’re only going to get better. But the biggest hurdle is bringing Mobile Rainbow Six to lower spec phones. We have part numbers for a variety of phones to ensure we bring a fair Headquarters experience to all players. We brought all the basic mechanics that are at the heart of Headquarters and our phones within our benchmarks will have an immersive environment, solid destruction, high frame rates, smooth gun battles, and a highly competitive tactical shooting experience.

Beyond its core 5v5 mode, which feels like a faithful adaptation of the Siege formula, are you looking to add more modes and experiences designed specifically around the mobile experience?

Yes, we have focused a large part of our development to be ready to live. We have developed many tools and levers to allow our game to be flexible and feel alive. Game modes are a big part of that, as we have many LTE events (limited time events) planned that we are not able to comment on yet, but look forward to sharing them soon! 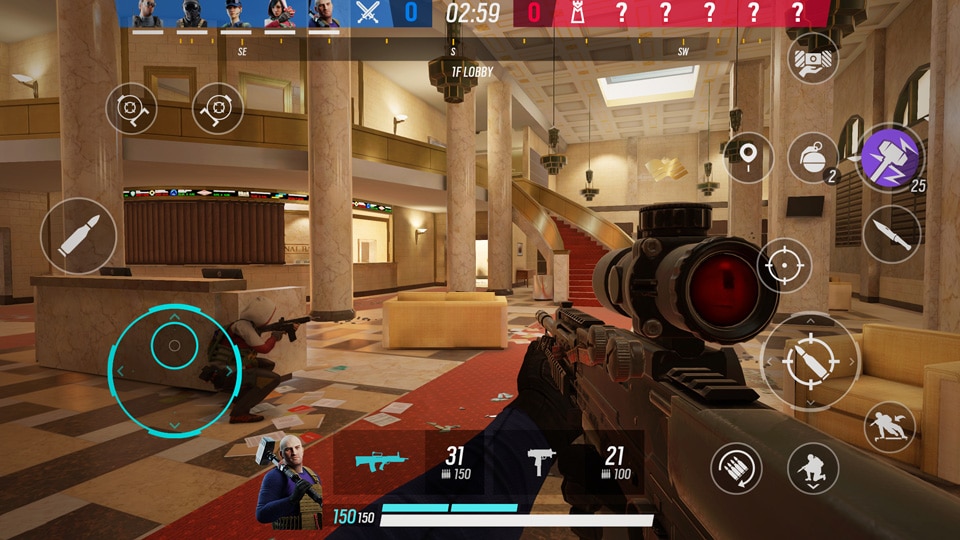 “We want R6M be a fair experience and that the game be highly competitive. Players will be able to unlock operators, attachments, and cosmetics for free by playing the game.”

How will you approach the monetization of the game?

We want R6M be a fair experience and that the game be highly competitive. Players will be able to unlock operators, attachments, and cosmetics for free by playing the game. We have a new system called tickets, where players can try an operator and if they try an operator enough times, they unlock them. We will also have a Battle Pass and a store to buy cosmetics, such as skins, weapons and avatars.

What can you tell us about your plans for Rainbow Six Mobiles ongoing support in terms of seasonal content, battle passes, etc. ?

We will have short engaging seasons, with one operator release per season. There will be different events and game modes and the possibility of a new map. There will also be a battle pass with lots of content and leaderboards to climb. And in the future we will have a ranked mode which we will talk about at a later date.