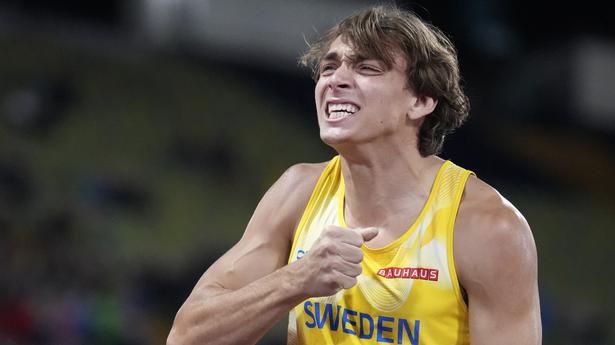 World and Olympic pole vault champion Armand ‘Mondo’ Duplantis retained his European title overall in Munich on Saturday while the unstoppable Femke Bol claimed a third gold of the championships.

Duplantis, who just broke his own world record in Eugene as he clinched world gold with 6.21 meters last month, set a championship record of 6.06m at Olympic Stadium.

“It was great. The goal today was to try and win and beating my own championship record was the icing on the cake,” said Duplantis.

Coming into the continental showpiece, Duplantis was on an 18-game winning streak and was once again a class apart from a field that struggled throughout in cool, wet conditions.

“I felt like I jumped very well, I can’t complain,” said the Swede, adding that he was never likely to go for the world record.

“It didn’t seem like it was really on the cards today. Sometimes it’s like that, it’s not for every day.

The Dutch were thrilled in the women’s 4x400m relay, with Bol producing an outstanding anchor leg to overtake Britain’s Nicole Yeargin and Belgium’s Camille Laus to seal victory and a third gold medal.

In arguably the busiest program of any athlete in Munich, Bol had already sealed a daring double by winning the 400m flat and his favorite 400m hurdles.

The 22-year-old Bol took over in third place on the fourth and final stage, biding his time before moving smoothly into lane two and heading away from his rivals.

“It was such an amazing race,” Bol said. “I really enjoy racing with my girls and against other runners.

“This championship feels special to me.”

The Dutch quartet also made up of Eveline Saalberg, Lieke Klaver and Lisanne De Witte clocked 3min 20.87sec for the victory.

There was silver for Poland and bronze for Great Britain, whose men’s quartet won gold in the men’s 4x400m relay.

It was left to 400m bronze medalist Alex Haydock-Wilson to hold off rivals on the anchor leg as Great Britain won in 2:59.35. Belgium won silver and France bronze.

The Briton took the lead with 200m to go, followed by teammate Jemma Reekie.

Reekie was caught by France’s Renelle Lamote as Hodgkinson crossed the line with her arms up in 1:59.04.

“It’s more a mental thing going into this championship in four and a half weeks, so it’s definitely about picking myself up and concentrating,” Hodgkinson said.

“It’s still a really tough competition there, so I made sure I was on the ball – I’m just happy that I executed well and managed to come away with a gold medal.”

Greece’s Elina Tzengko won gold in the women’s javelin with a personal best 65.81m ahead of Serbian teenager Adrianna Vilagos with 62.01.

The evening session in Munich ended with another championship record as Albanian Luiza Gega won the women’s 3000m steeplechase in 9:11.31.