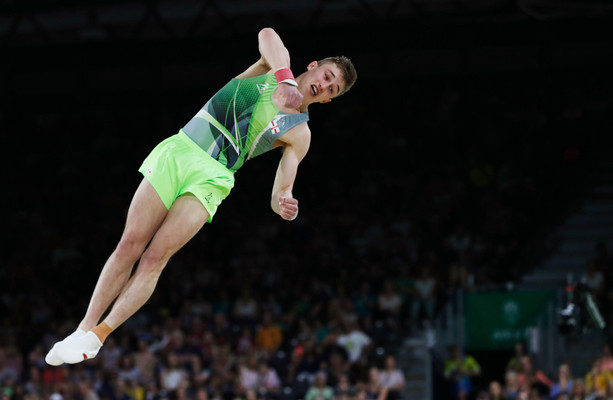 EWAN McATEER of ANTRIM was sixth in today’s vault final at the Commonwealth Games.

McAteer had a solid first jump before suffering a fall on his second jump, scoring 13.750 in a final won by England’s Jake Jarman, who scored 14.916.

“I’m very proud of my performance at my second Commonwealth Games,” said McAteer.

My goal coming here was to make a final, so achieving that is something I’m so happy about. I really went for a medal in the final and I’m disappointed that I crashed on my second jump, but I walk away from those games thinking they were a great success.

Luke Carson, Men’s National Performance Coach for Gymnastics Ireland, added: “Ewan’s first vault was one of his best of the year. His second safe was just overcooked.

“Too much rotation forced him to place his hands down which cost his average score dearly. We are now focused on the European Championships.

Conor McGovern, McAteer’s personal trainer, Ewan, said: “Thrilled with our performance. The goal was to go out and get into the top eight on vault and we did that with a 6th place finish. The work here has prepared us and honed our competitive skills so that we are ready for the Europeans.

Get closer to the stories that matter with exclusive analysis, insights and debates in The42 Membership

All three gymnasts are expected to be involved for Team Ireland at the European Championships, which will take place in Munich later this month.