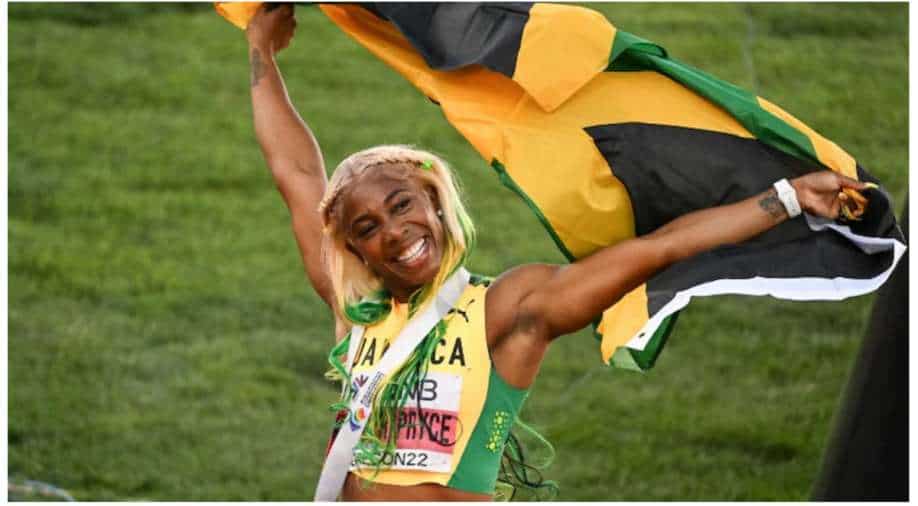 Jamaica’s Shelley-Ann Fraser-Pryce made history on Sunday by winning a fifth world title in the 100m on Sunday, as Team USA won four more crowns on the line in Eugene.

Fraser-Pryce, a 35-year-old mother, led from the gun to the boards in a consummate display of sprinting that belied her age. The Jamaican, who previously won the blue ribbon event in 2009, 2013, 2015 and 2019, won with a championship record 10.67 seconds.

Shericka Jackson took silver with a personal best 10.73 seconds, while four-time Olympic sprint champion Elaine Thompson-Herah took bronze (10.81). It was the first time a nation had won medals in the women’s 100m at the world championships and came just a day after Fred Kerley led an American sweep in the men’s 100m.

“It was definitely something on the cards,” Fraser-Pryce said of the potential sweep. “I’m glad I was the one to finish first in the sweep and I’m glad the other ladies came through and we got to celebrate 1-2-3. It’s special, it’s my fifth world title over 100 m, and do it at 35, yes I said 35!”

On a surprising day of results for Team USA at home, Ryan Crouser led another USA sweep, this time in the shot put alongside Joe Kovacs and Josh Awotunde. There were also 1-2 finishes in the women’s pole vault thanks to Katie Nageotte and Sandi Morris, and in the 110m hurdles as Grant Holloway retained her title ahead of team-mate Trey Cunningham.

Holloway’s victory in the hurdles was marred by the injury withdrawal of Jamaican Hansle Parchment while Devon Allen was dramatically ruled out after a heartbreaking false start at the same track where he played as a varsity athlete.

Parchment, who stunned Holloway to win Olympic gold last year, clipped a hurdle during the warmup and walked away clutching his thigh.

Holloway admitted he had sympathy for Allen’s marginal false start. “I didn’t think he had a false start at all,” he said. “But technology says otherwise. It’s one of those things. It’s athletics. Anything can happen in athletics. It is what it is.”

Allen meanwhile described his false start as “frustrating”. “You train a whole year for a competition that lasts 13 seconds and that’s it,” Allen said. “It’s happening and I’ll learn from it – and I’ll make sure I don’t react so quickly next time.”

Elsewhere on the track, Norway’s Karsten Warholm smoothly qualified for Tuesday’s 400m hurdles final. The 26-year-old Olympic champion and world record holder suffered a hamstring injury but this week swore he was 100 per cent and looked comfortable as he went through his half- final in his bid to win a third consecutive world title.

“It was easy. I did my thing for the first corner to test my speed,” Warholm said. “It was good, nothing bad. To be honest, it’s not that often that I can run 48 seconds that easily, so that’s good.”

He will be joined in the final by his main rivals, the American Rai Benjamin and the Brazilian Alison Dos Santos, silver and bronze medalists in Tokyo. Belgian Olympic champion Nafi Thiam was in charge of the heptathlon after four events, clocking 13.21sec in the 100m hurdles, 1.95sec in the high jump, 15.03m in the shot put and 24.39sec in the 200m.

That left her with 4,071 points, 61 ahead of Anouk Vetter of the Netherlands, while defending world champion Katarina Johnson-Thompson of Great Britain was sixth with 3,798 points.