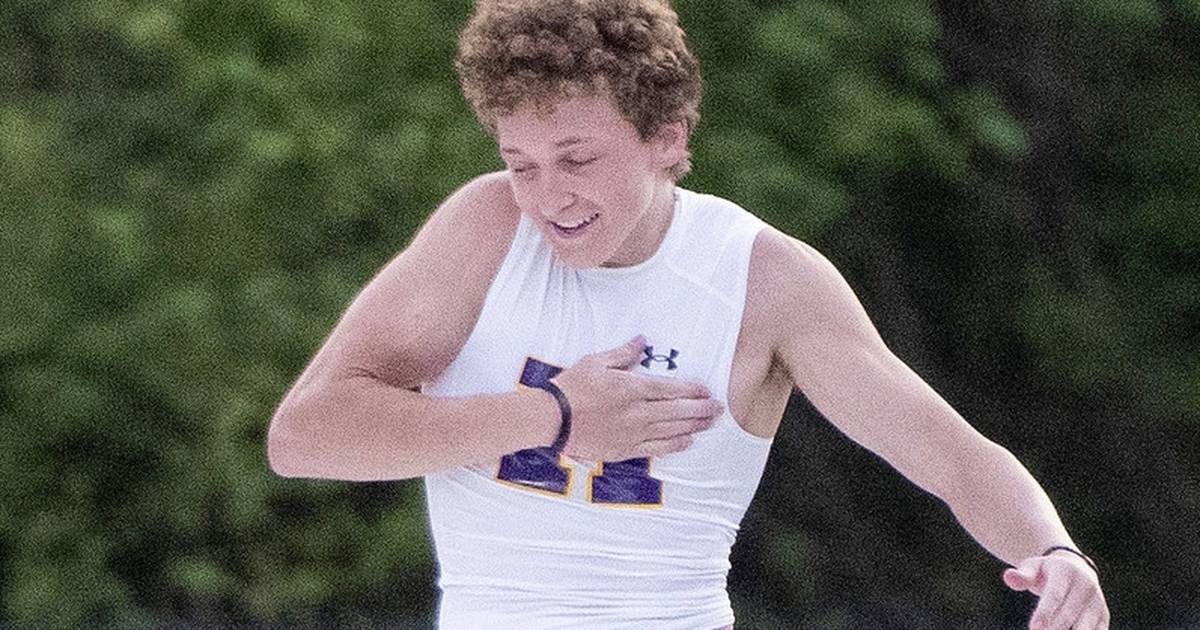 The first time Cody Johnston took flight, he knew that was where he wanted to be.

“I loved it right away, that feeling of flying through the air,” he said.

Those first flights came six years ago, when Johnston got involved in the event that has become synonymous with his family name: the pole vault.

Johnston is writing his chapter in the family book. The Hobart junior won a state championship on Saturday with a mark of 16-foot-8 at Indiana University in Bloomington.

Piere Hill of Portage brought the other state title back to Northwest Indiana, winning the long jump at 23-4.75.

For the Johnstons, pole vaulting is a family affair. Their story in the event begins with Cody Johnston’s grandfather, Jim Johnston Sr., a 1954 Hobart graduate who won a national title at Purdue.

The brothers’ success over the past few years began with family trips to local fairs and festivals, where they competed in “street jumping” competitions with a pole vault pit mixed with the carnival rides and food stalls. The Indiana State Fair was a particular favorite for Cody Johnston.

“It’s probably the best, with the atmosphere and the closeness to people,” he said. “It’s right there in the middle of everything, and it would last all night.”

There were also routine training sessions in the large courtyard of the Johnston family home, just down the street from Hobart High School. This large space features pole vault facilities that rival any other high schools in the area, but feel more like a shrine to the event itself, including a tribute to Jim Johnston Sr., who died in August 2020 at the age of 85.

The combination of street jumps and backyard workouts with Riley and Cody Johnston competing and coaching Jim Johnston Jr. served as the foundation for their careers. After Riley Johnston graduated last year, Cody Johnston became the favorite to win the state title in 2022, which came with his own expectations.

Like his brother before him, Cody Johnston dove into the daily workouts and workouts that were charted on two boards posted near the family’s dining room, with workouts dating back to January. The second chart, which resumed in April, has a title: “Road to State”.

As the season progressed, however, Cody Johnston said any pressure he felt began to fade as he began to rack up wins. On April 23 at LaPorte, he set a personal best of 17 feet, which remains his best.

By the time the official meeting arrived, his nerves were minimal – possibly because his brother, who was filming from the crowd, had exhausted the family quota.

“My nerves were at their highest,” Riley Johnston said between laughs. “I was more nervous when he was jumping because it was out of my control.”

Cody Johnston slammed into the bar on his first attempt at 15 feet.

“And then they had the national anthem, so he had to wait,” said Jim Johnston Jr.

But Cody Johnston came to his senses and progressed to 16-8 to clinch his state title, giving him a moment to celebrate the accomplishment.

“That feeling when I found out I won the state and my dad hugged me — it was a really good feeling and a bit of a relief,” he said. “So I could just have fun and jump after that.”

As soon as that moment passed, however, he returned, as he put it, “to finish the job.” He attempted three times at 17-6.5, vying to break the state record of 17-6.25 set by Frankfort’s Colton Crum in 2018. He didn’t clear that height, leaving him with a goal for his senior season.

On Monday, Cody Johnston was back home, resuming his scheduled workouts with Riley Johnston, who is coming back from a dislocated left elbow suffered in his freshman season at Indiana.

“There really is no day off,” said Cody Johnston. “This system of today I lift or today I jump, there’s no rest day when you still have goals you’re trying to achieve.”

Dave Melton is a freelance journalist for the Post-Tribune.