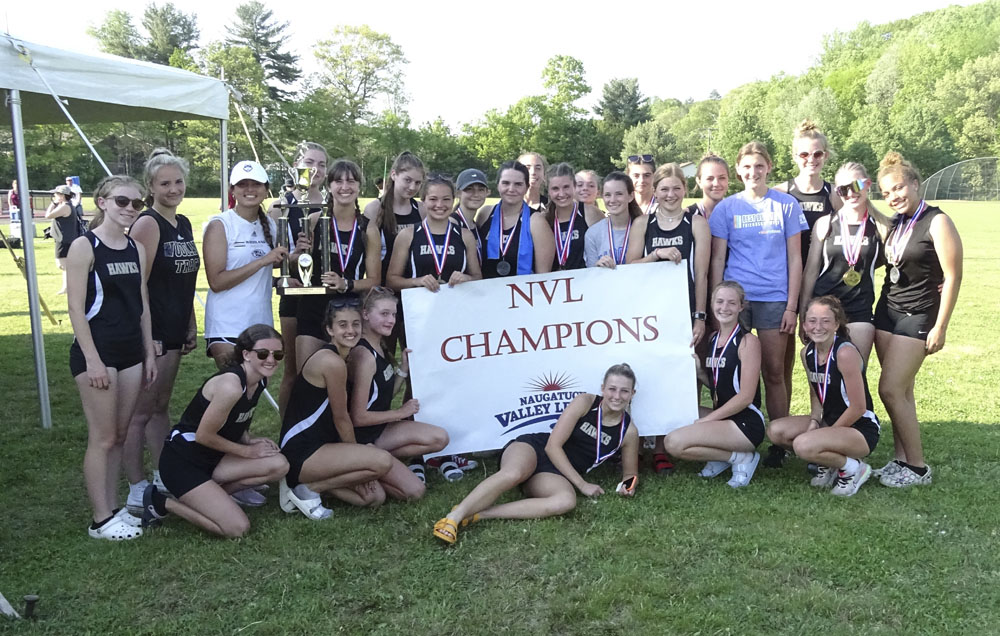 BY KEN MORSE
NEW CITIZENS
The Woodland girls knew what they were up against and rose to the challenge head-on, capturing another NVL title on May 21 at Torrington High School.
Some teams thrive in the heat of competition and with temperatures approaching 95 degrees, the Hawks took flight and outshot the rest of the field to defend their title.
“We knew going in that Naugatuck had a really good team,” Woodland coach Jeff Lownds said. “Watertown was also very competitive and we thought between those two teams and us it would come down to that, which he did.”
Woodland scored 161 team points, Naugatuck was second with 137 points and Watertown was a distant third with 119 points scored.
After winning the first track meet of the season against Woodland, it was no secret that Naugy was much better than his fifth-place finish in last year’s championship meet.
“Our coaches prepare us to do our best,” said Ayana Williams of Naugy. “Competing in the championship can be very intimidating, but we are prepared.
Layla Nemeth added: “It’s the memories of seeing Coach Hanley shoveling snow from the road so we could train, that’s what keeps us going. Our coaches believe in us and do everything they can to help us succeed.
Naugy always had talent but now they had depth to go with it. Woodland has a long line of success having won eight of the last nine titles, so it would be a case of taking advantage of that whenever the opportunity arises.
Naugatuck named Allie Murphy an outstanding hurdler after winning the 100 meter hurdles (15.35) and the 300 hurdles (record record 44.92). They also had the most outstanding jumper, Lily Jason, who finished second in the triple jump (35-07) and third in the long jump (16-06), as well as a second time of 12.81 in the 100m .
“Coach (Ralph) Roper is really good at stacking the lineup, putting us where we need to be to score the most points,” Murphy said. “Between Lauren (Sonski), Julia (Kropo) and Lily (Jason) and myself, as well as Alyssa (Jones), the coach has to get the best out of us.”
“I can’t remember the last time nobody qualified for the 3200m for the NVL Championships,” Roper said. “We knew we had this challenge ahead, but we thought we could make up some points elsewhere.”
Woodland scored points in every event except hurdles and it was that kind of diversity that kept them in the running. When it came time to drop the hammer, they did so with authority.
“We’ve had kids come forward,” Lownds said. “Laci Davis told me she was going to set a new school record in the triple and then went out there and did it. Chloe (Poulos) was named Outstanding Distance Runner and Sarah (Cooley) Outstanding Thrower, so we brought some gear home.
The Hawks outscored Naugatuck 42-0 in the 1,600 and 3,200m, and that’s all the difference it took to overtake the Greyhounds. Chloe Poulos was first in the 3200 (12:45.56), second in the 1600 (5:19.67) and third in the 800 (2:27.23). Daniella Celotto won the 1600m (5:17.37) and finished 4th in the 800m.
“I was a bit surprised to win the 1600m especially with Chloe in the race,” Celotto said. “I look up to him and the kids need to step up to every event to help us succeed.”
Cooley was second in the javelin throw (109-0), second in the shot put (31-8.5) and fourth in the discus (93-04). Emma Swanson was second in the discus (95-02) and fourth in the shot put (29-11). Isabella Bianchini was second in the pole vault (8-06) and Davis won the triple jump (school record, 36-08). Paige Letourneau was second in the 200m (26.46) and fourth in the 100m (12.92), Amber Rosato was third in the javelin (107-0) and Kathleen Henriques was third in the 3200m (13:13, 75).
“Participating in multiple events requires diversity,” said Sarah Alessio. “The form and the technique it takes to go further, to jump higher, to run faster, we work on it every day to be the best possible at championship time.”
The Hawks 4×800 relay team of Ireland Starziski, Kim Poulos, Faye Carnemolla and Henriques took silver with a 2nd place time of 10:21.09.
The Greyhounds 4×400 relay team of Kropo, Leticia DoNascimento, Lauren Sonski and Nemeth won gold with a first-place finish in 4:16.58.
“We had young kids picking up the slack,” Roper said. “Unexpectedly, I think we got the most out of our line-up. We went from fifth last year to second and that’s a lot of progress in a year. We have a lot of new young athletes and we are looking to continue that.
Naugy had great performances from Divine Kabongo (first in the long jump, 16-10); Alyssa Jones (1st on disc, 100-11); and Sonski (1st in the 400, 1:01.46; 2nd in the 800, 2:25.42). Kropo added third place in the 400m (1:02.34) and fourth in the javelin (102-0).