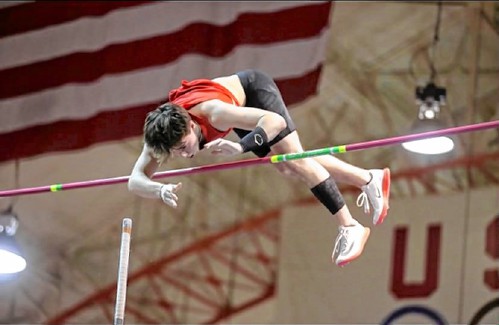 Jack Vecellio added to his collection of trophies this month.

Last weekend he took second place at the Adidas Nationals, capping off a great winter season for the senior Frontier Regional.

“It’s been a great few weeks,” Vecellio said. “These are extremely useful meetings. It puts you in a really competitive mindset where you’re up against some great people.

The first of three major championships in which Vecellio participated was the Nike Indoor National Championship, which took place on March 11 at the Ocean Breeze Athletic Complex in Staten Island.

Although not feeling his best, Vecellio took first place in the seven-person field with a jump of 15 feet and 11 inches.

He then stayed in the Big Apple and competed in the New Balance National Indoor Championship at The Armory Track in Manhattan, which turned out to be the best of three for Vecellio. He set a personal best jump of 16-6¾, breaking his own Massachusetts state indoor record.

The competition certainly tested the senior’s stamina. With so many athletes participating, the jump took over five hours at the event, which means a lot of sitting and waiting. Four other athletes reached the same mark Vecellio hit from 16-6¾, but he was the only one to land all of his jumps on his first attempt, making him the winner.

“It was a great weekend,” Vecellio said. “I wasn’t feeling too well and I was a little sick during the Nike event. Winning New Balance was the best thing ever. After missing my third attempt on 16-10, there were two kids after me and if they missed too, I won. I was just watching them and when the last kid ran out I was jumping up and down. I was so excited, it was the best feeling. I was seeded fifth, but I went into it knowing I would do well.

At a big event like New Balance, he knew it might come down to who could put a clean sheet in the event of a tie. He strove to make every jump on his first attempt, which ultimately sealed the victory.

“I knew the other guys were good,” Vecellio said. “I went in knowing it was going to be tight. I had to clear everything on my first attempt if I wanted to win. It was my goal and I was able to do it. »

Last Saturday, Vecellio traveled to Virginia and competed in the Adidas Nationals at the Virginia Beach Sports Complex. He took second place with a high jump of 15-11¾.

Second place was no surprise. The winner – Maddox Hamm of Scottsboro, Ala. – had a peak rating of 18-1, which is the second best height ever for high school athletes. Hamm is only a junior.

With so many events in a short time, Vecellio focused on recovery to ensure he could put up big numbers at all three events.

“We really limited training to twice a week,” Vecellio said. “Rest is the most important thing at the moment. When I go to these demanding and energetic competitions, it is important to be rested. I was staying at home all week, jumping once or twice. I was really prepared for the three competitions. Physically I was ready, where I was mentally was going to decide. Fortunately, I was also mentally ready.

As the indoor season draws to a close, Vecellio is now preparing for the outdoor season with the Redhawks. He got off to a strong start to practices this week, aiming to break another state record before graduating.

“I would like to jump 17-6 by states,” Vecellio said. “I would like to break the state record, which is 17-1. I think I will be able to do it once it gets a little warmer. These are my goals for the season. »