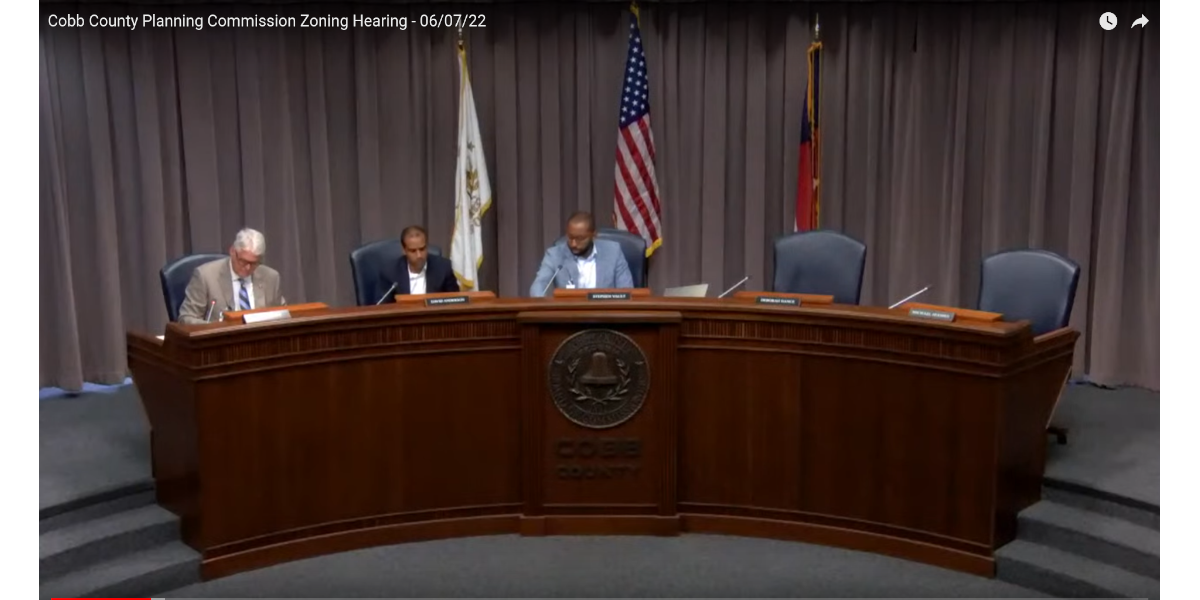 The Cobb County Planning Commission, at its meeting on Tuesday, June 7, recommended approval of a rezoning application to build a townhouse community in Cobb County Commission District 4, under subject to modifications to be worked out between applicant and Cobb County DOT.

The property is on the north side of Mableton Parkway, northwest of Hunnicut Road, and the zoning file number is Z-83-2021. The plaintiff is St. Bourke, a development company in Atlanta.

The applicant’s representative was Dan Mason, and if the application is approved, the project will be built by Kerley Homes.

Mason requested that the matter not be held or pursued at the Planning Commission level, and that if the commission recommends approval or denial, that it be referred to the Cobb Board of Commissioners for decision.

The site plan in its current form calls for 38 townhouses on the eight-acre property, with a density of 4.75 units per acre. Mason said the company is anticipating prices around $300,000.

The current zoning is OS and RM-12. The proposed zoning is RM-8.

The operating system is described as follows in the zoning document:

The OS District is established to provide locations for offices and business distribution/service
installations and assembly processes that do not emit noise, vibrations, smoke, gases, fumes, odors
or radiation and are located entirely within an enclosed building that does not involve
the manufacture or manufacture of any product.

RM-8 is a multi-family residential category.

The first person to speak out against the project was Mary Rose Barnes, a longtime Cobb County land use and zoning activist. She began by stating that she was speaking on behalf of the residents of Rioca Circle, a street adjacent to the property.

Barnes said, “Seven months of (the) many, many, many twists, omissions, contradictions, corrections, ambiguities and inaccuracies have made this process pure torture for the neighborhood.”

“The plaintiff did not discuss or disclose the commercial nature of the transaction, questioning the nature of the legal liability,” she said.

Barnes said a June 1 letter of stipulation from Mason was submitted on behalf of Kerley Homes, not the rezoning applicant.

“You can’t tell which entity has always been behind the scenes,” she said. “Which party did Mr. Mason really represent in this situation? …we need to question the validity of the representation implying this application.

The next speaker was Sonya Wheatley, representing the Mableton Improvement Coalition.

She said she appreciated the work that had gone into the application and expected the MIC to be at the meeting recommending approval, but two problems arose, one of which was insurmountable.

The first issue she raised was the community’s request that the plaintiff fund an escrow account with $150,000 to cover any damage caused by blasting near adjacent residential communities.

She said the insurmountable problem was the Cobb DOT recommendations. She said it is very important that the roads in the development are public so that a small development of 38 houses does not bear the responsibility of road maintenance.

So the MIC, while not opposed to townhouses there, asked the Planning Commission to recommend denial, Wheatley said.

District 4 Planning Commissioner Michael Hughes was not present at the meeting, so Stephen Vault led the discussion on the application.

Vault then brought in Amy Diaz from the Cobb DOT.

Diaz listed Cobb DOT’s concerns with the plan, including that the entire roadway could not be made public. A small area at the end of the road should remain private.

Vault asked if the plane was repairable by Cobb DOT standards before the Board of Commissioners meeting.

Diaz said she thought it was fixable before the meeting, but firefighters should be involved with the Cobb DOT.

Fred Beloin asked if the deviations requested by the applicant would affect the Cobb DOT recommendations.

Diaz said she was unaware of any inconsistencies between the deviations and DOT recommendations, but those issues would be addressed during the plan’s review.

Vault called Mason to the podium and asked him to address the escrow and public road issues.

Beloin asked if Kerley Homes would agree to be bound by all the stipulations. Mason said yes.

A representative from the fire department was asked if the existing site plan would meet fire code requirements. He said that as a private road it would, but as a public road it would also require Cobb DOT approval.

Wheatley was called back and told the commissioners that the MIC’s view is that the issues should not depend on the review of the plan since some of them might require a complete overhaul of the plan.

Hughes moved a motion for the Planning Commission to recommend approval subject to the applicant responding to staff recommendations with a reworked site plan.

The motion passed, so the application will go to the Cobb County Board of Commissioners for decision.

Watch the Z-83 hearing below