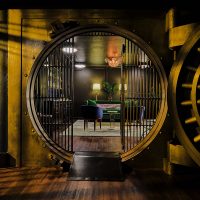 What happens when the coronavirus hits and a jeweler has too much free time? In the case of Richter & Phillips, they decided it was time to renovate part of their store and the results are remarkable, not only for the company but also for Cincinnati.

Richter & Phillips Jewelers is located inside a century-old bank on 6th and Main in the city’s downtown area. The building was a wreck when they moved in, its owners say, but a renovation has brought it into a modern era. Today, the family business has the largest jewelry showroom in town.

Everything looked good except for the old bank vault in the basement. When the pandemic hit and the store closed for a short time, father-son owners Rick and Eric Fehr said they decided it was time to finish the job they started in 2016. when they moved into space.

With the help of Digs, a local interior design firm, the large basement walk-in banking space is now known as The vault, an upscale speakeasy inspired by the 1920s. The vault now has two main uses: the jewelry store uses it as a private meeting room, accommodating customers, including couples looking to design the engagement ring or the perfect birthday present.

Its other use is for the community. Richter and Phillips made the space free for nonprofits to use as needed. So far, groups ranging from a local book club to nonprofits to Cincinnati groups of all kinds. Richter & Phillips also hopes to partner with local groups who use the space for special events and fundraisers.

“We always knew it could be something special,” says Eric Fehr, son of Rick and vice president and graduate gemologist at Richter & Phillips.

The safe is a stunner of a space. A long staircase and a white marble hall lead to its heavy iron door, original to the bank. Inside, there is an intimate lounge area punctuated by an emerald green sofa and two cobalt blue armchairs. Greenery helps accent the dark walls in addition to period-style light fixtures and a fully stocked bar with a marble counter. One wall features historic Richter & Phillips advertisements from that era, a nod to the jeweler’s impressive past.

That’s why The Vault is also a place to celebrate the history of jewelry itself. Richter & Phillips recently celebrated its 125th anniversary and is in its fourth generation of family ownership. Founder Frederick W. Fehr, a traveling diamond salesman, opened his first store in 1930. Today, his grandson, Frederick “Rick” Fehr III, runs the show.

Richter & Phillips also hosts its own in-store fundraising events, so The Vault will be a welcome addition when they return to larger-scale gatherings. Its annual event, Whiskey & Watches, helps raise money for local charities and nonprofits and can accommodate over 250 attendees.

Ironically, Eric Fehr is a former lawyer and in the past had put liens on the bank building where his family business now operates. “The city was not proud of [the former space]says Fehr, making her current transformation even sweeter.

One of his favorite moments for The Vault so far came recently with a client who bought diamond studs as a birthday present for his wife. He asked to use The Vault space, and with the help of the jeweler, they turned it into a kind of cocktail bar.

“He told her they were going to dinner but stopped here first. When they got down to The Vault, there were the studs and the champagne waiting for them,” says Fehr. had a cocktail together before dinner. I’m sure she’ll wear those studs every day, but she’ll remember this moment even longer.

Above: A former bank vault inside Cincinnati-based Richter & Phillips Jewelers has gone from blah to shiny thanks to a recent renovation, turning the space into a private meeting room for the jeweler and a gathering space for the community (all photos courtesy of Richter & Phillips).